The use, wearing and display of Crests and feathers
Post Reply
5 posts • Page 1 of 1

Is there any significance to an animal in a crest being ducally gorged? I ask because I recently met someone with the surname "ABER" and just for fun researched the name which I found in Burke's. The crest is a Talbot,Ducally Gorged. I thought with a Duke's Coronet in the crest this person should be someone of note, but I can't find anything. Maybe someone here in the forum could shed some light who this person was.
Thanks in advance
Joseph M James
Top

Could you provide the text of the Burke's entry for Aber. That may help us with the identity of the Aber family.

I doubt that heraldic authorities would today allow a grant that described such a coronet as "ducal". As to a talbot (hunting dog) having a ducal coronet as a collar, I cannot suggest a valid reason. Vanity? The Earls of Shrewsbury (Talbot) were/are the most prominent family of that name and they have talbots (uncollared) as supporters: 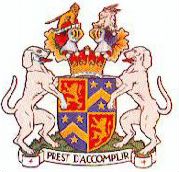 Chris Green
President of the International Association of Amateur Heralds

All I have is the entry from Burke's General Armory 1884. Aber. or, a fesse embattled az. Crest- a demi talbot ramp. ar. ducally gorged gu. I seem to have a knack for finding people in Burke's who don't exist anywhere else. This really makes wonder about Burke's. I know Aber is German, but I found nothing about it in my German resourses. The person I met with the surname Aber has been researching his genealogy and so far is solidly English.
Top

Mr. Green, I checked Boutell's Heraldry 1890. It says " This coronet, although blazoned a ducal coronet, has no reference to ducal, or any other rank". I learned something new. I thought having a coronet around the animal's neck in a crest meant something special. Oh well.
Top

The blazon does not enlighten us much. The arms are traditional rather than "Victorian". The talbot breed of dogs seems to have died out at the end of the 18th century, so perhaps the arms are older (though of course one may use an image of an extinct dog just as one may use the image of a mythical beast).

But then I looked here:


Or, a fesse embattled[on the upper side only] sable--ABBERBURY, Oxon, and ADDERBURY, Sussex

So there is hope!
Chris Green
President of the International Association of Amateur Heralds